At its peak, the Austro-Hungarian Empire was a cultural powerhouse, and this tradition has been preserved in both countries to this day, despite the effects of war and political turmoil since its collapse. Here are some of actors from Austria who have received worldwide acclaim because of their work.

At its peak, the Austro-Hungarian Empire was a cultural powerhouse, and this tradition has been preserved in both countries to this day, despite the effects of war and political turmoil since its collapse. Here are some of actors from Austria who have received worldwide acclaim because of their work.

Maximilian Schell was born in Vienna in 1944, but was taken to Zurich, Switzerland by his parents during the Nazi occupation of Austria. At the end of the war the family returned to Austria. Schnell became of the first European actors to be recognized both at home and overseas. He was the first German speaking actor to win an Oscar after World War II.

Schell’s father was a Swiss writer, his mother an Austrian actress. Maximilian studied philosophy and art history at university in Zurich, but also studied in Munich as well as in Basel, where he made his acting debut on stage at 23. In the 1960’s he appeared on stage in London, and translated worked by William Shakespeare and John Osborne. He took a try at opera as well, appearing by invitation of Placido Domingo at the Los Angeles opera in 2001 and 2005.

At the age of 28, he appeared in his first American film, starring alongside Marlon Brando, Montgomery Clift, and Dean Martin in the war drama The Young Lions. In 1961 he starred in Judgment at Nuremberg alongside Marlene Dietrich, Burt Lancaster, and Spencer Tracey, for which he received the Academy Award for best actor, making him the first German speaking actor to do so since World War II. He had success behind the camera as well, earning Oscar nominations for the first two films he directed: First Love, and The Pedestrian.

Later in life he portrayed Lenin in the HBO film Stalin(1992), and Tim Roth and Edward Furlong’s father in Little Odessa. He also appeared in the films Vampires, Telling Lies in America, and Deep Impact.

His sister, Maria Schell is also an accomplished actress. He befriended actor John Voight during the filming of Little Odessa, who later asked him to be godfather to his daughter Angelina Jolie. He was a Swiss and Austrian dual citizen, and resided in both Los Angeles and Preitenegg. He died in Innsbruck in 2014 at the age of 83.

Romy Schneider was born in Vienna in 1938. Her father was a German actor, and her mother was an Austrian actress. Even though the family moved to Germany before she turned 1, and she never held Austrian citizenship, she always prefered to be referred to as an Austrian actress. She attended design school in Cologne, and got her first acting job in 1953, when she played along side her mother in When the Lilacs Bloom Again.

Her big break came with the Sissi Trilogy, in which she portrayed Princess Elisabeth of Austria. Her performance was highly acclaimed, and the first installment of the series became one of the highest grossing films in Austrian and German cinemas. She was not yet 18. Her popularity due to the film got to a point where she couldn’t go out in public without mass hysteria ensuing, which caused her to deny involvement in a 4th Sissi Film, and prompted a move to France.

There she met Alain Delon in 1958, during the filming of Christine. A year later they were engaged to be married, despite not getting along in the beginning. Delon thought that Romy was an innocent little girl, and Romy thought Delon was too handsome, too young, and too well groomed. Their relationship was full of drama and turmoil. In 1963 they broke off their engagement and both took solace in their work. The same year she was nominated for a Golden Globe for her role in the film The Cardinal. In 1969 Delon talked Romy into reuniting for the film The Swimming Pool, which ended up being their most critically acclaimed collaboration.

Romy’s 14 year-old son died in an accident in 1981 and she could never get over it. She was found dead from cardiac arrest in her Paris apartment in 1982.

Waltz studied theater in Vienna and in New York, and began acting professionally in Vienna and Zurich. Later he went on to act in television. He is also an aspiring cinematographer, and directed his first film in 2000. Waltz speaks 3 languages fluently: German, French, and English, which allows him to work flawlessly in American, English, Australian, French, Swiss, German, and Austrian productions. Quentin Tarantino discovered him in 2008, and gave him a supporting role in his 2009 film, Inglorious Bastards, his breakthrough role that also earned him an Oscar.

Tarantino claims that Hans Landa was one of the best characters he ever wrote, and if had he not found Waltz for the role, he may not have made the film. The director cast Waltz in his next film, Django Unchained, as well, for which he again was awarded an Oscar.

In 2014 he was given a star on the Hollywood Walk of Fame, which means he has secured a name among the Hollywood greats. In 2015 he played the villain in James Bond: Spectre. “Playing a villain was always attractive to me. Bad guys in films always have an important dramatic role, embodying the conflict which the hero must combat.”

Arnold Schwarzenegger was born in Thal, a small town near Graz in 1947. He had a strict upbringing, and by a young age he had tried his hand at many sports due to encouragement from his father, and at the age of 14 he chose bodybuilding over football as his main focus, in order to be like his idol Reg Park. His hard work and persistence earned his six Mr. Universe titles and seven Mr. Olympia titles between 1965 and 1980, gaining him the nickname “The Austrian Oak.” “I knew I was a winner back in the late sixties. I knew I was destined for great things. People will say that kind of thinking is totally immodest. I agree. Modesty is not a word that applies to me in any way - I hope it never will.” At home he was considered a hero for his accomplishments.

Acting attracted Schwarzenegger from a young age, always identifying with the heroic characters he saw in films. His build helped him gain his first role in 1969’s Hercules in New York, but his accent and unpronounceable last name made his first few years in the U.S. difficult. His breakthrough role portraying Conan the Barbarian in the 1982 film of the same name. Despite saying only 17 sentences in the whole films, his iconic role in 1984’s Terminator brought him and director James Cameron into the spotlight.

This began a steady stream of leading roles in Hollywood blockbusters. Next to action films, he took roles in many comedies, like Twins, and Kindergarten Cop as well. His accent became his iconic trademark. In 1992 he opened a restaurant in Santa Monica called Schatzi, which means “sweetheart” or “darling.”

After the filming of Terminator 3, he decided to put his acting career on hold and focus on politics, which was always a dream of his. In 2003 he was elected the governor of California, being teasingly referred to by many as “The Governator.” 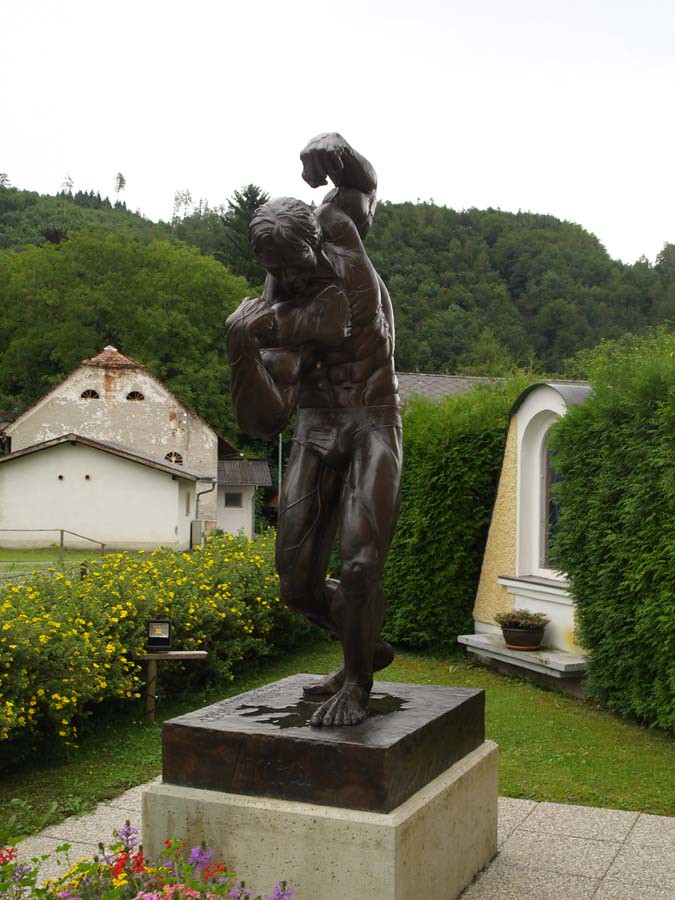 But his popularity began to fall after introducing the death penalty. Graz’s sports stadium was named after him until 2005, when the people of Graz decided that his was not respectable enough for it to bare his name due to his enthusiastic propagation of the death penalty. It was in this year that he as governor rejected for the third time the proposal of mercy towards those condemned and to abolish the law. Because of this the representatives of the social democrats, the greens and communists of Graz proposed to change the stadium’s name. But before the people even had a chance to vote, Schwarzenegger withdrew the right he gave to the stadium to use his name. So ever since then it bears the name: UPC-Arena. He also sent back the ring that he received from the governors of the city which symbolised the respect they felt towards him. And yet regardless of all this, he stated that he still stays truly Austrian in his heart and a citizen of Graz.

He is one of the few people who was allowed to keep their Austrian citizenship despite a political career in the U.S. In 2010, close friend Sylvester Stallone talked him into taking a small role in his 2010 film The Expendables. In 2011 he returned to acting. Although his political views and personal life may not have been perfect, he is a good role model in the sense that he made all of his dreams come true through hard work and persistence. Because of this, a museum and a bronze statue were erected in his hometown of Thal in his honor, which were christened on his 64th birthday.