Dishes you must try if you’re shooting in Austria

At every film shoot the same question always reoccurs: they always ask us as a production service company: What kind of local dishes do you think I should try and where? Well with this article we would like to forestall this question, so here we have collected all the national dishes that we recommend.

When imagining Austrian cuisine, often, only Viennese dishes come to mind, but in fact, Austrian cuisine is very diverse, and each region offers many unique culinary delights. Austrian cuisine as we know it today, developed during the peak of the Austro-Hungarian Empire in the 19th century, when dishes became heavily influenced by Italian, French, and Hungarian tradition. Often Austrians themselves can’t tell you exactly where their favorite dishes come from. An Austrian menu can almost act as the text for a class on the evolution of the European cuisine.

At every film shoot the same question always reoccurs: they always ask us as a production service company: What kind of local dishes do you think I should try and where? Well with this article we would like to forestall this question, so here we have collected all the national dishes that we recommend.

When imagining Austrian cuisine, often, only Viennese dishes come to mind, but in fact, Austrian cuisine is very diverse, and each region offers many unique culinary delights. Austrian cuisine as we know it today, developed during the peak of the Austro-Hungarian Empire in the 19th century, when dishes became heavily influenced by Italian, French, and Hungarian tradition. Often Austrians themselves can’t tell you exactly where their favorite dishes come from. An Austrian menu can almost act as the text for a class on the evolution of the European cuisine. 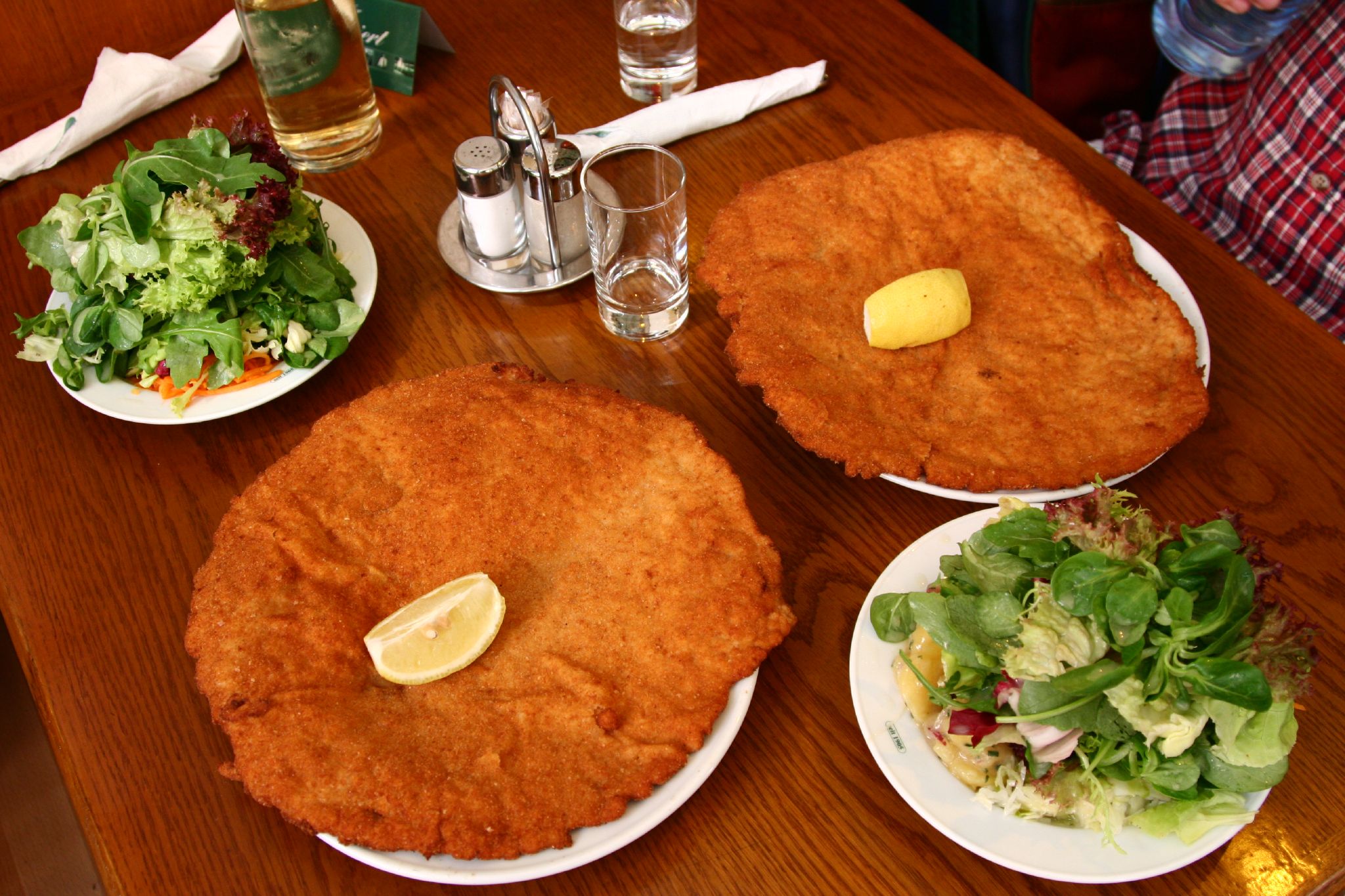 preparing this type of breaded, pan fried veal since the 16th century, though this technique can be traced back to the Jewish population of Constantinople. This method of preparation appealed to field marshal Joseph Radetzky, who took the recipe as a “spoil of war” after his occupation of Milan. It was perfected during the height of the Empire, and Wiener Schnitzel and Austria have since become synonymous. Certain rules of preparation make the Wiener Schnitzel the Wiener Schnitzel. The dish must be made from veal cutlet, the most tender meat found in young cattle. If pork or beef are prepared in a similar style, it may not be called Wiener Schnitzel, but Schnitzel nach Wiener Art, or Viennese style Schnitzel (which means slice).

Youtube get to know how to make wiener schnitzel

Important factors in the preparation is the thickness of the meat as well as the temperature of the oil. The appropriately thin piece of meat covered in the proper layer breading pan fried in sufficiently hot oil creates an effect where the meat itself is steamed rather than fried, and the bread crumb crust is nice and crispy. It is then typically served on a bed of potato salad with vinegar dressing.

The world-famous Esterházy Rostbraten is a specialty of Burgenland, whose dishes draw elements from several other traditions, especially those of Croatia and Hungary, which is no surprise, due to the fact that it is Austria’s easternmost province. The dish is named after Prince Paul Anton Esterházy, member of the famous Esterházy family of Hungarian nobility. He had a very successful political career as Minister of Foreign Affairs and later an adviser to Franz Joseph I.

It was common knowledge that Prince Paul loved to eat, therefore it is not a surprise that they named a dish after him. There are two theories as to why they named this particular one after him. The first is that he came up with this mode of preparation. The second, and more likely reason, is that the chef who first prepared it wanted to give the Prince a shout out on his menu, as well as give his dish a name that that would secure its immortality. Its preparation is quite simple. Pan fry a beef roast, serve with seared onions, carrots, and parsnips, with sour cream on top. 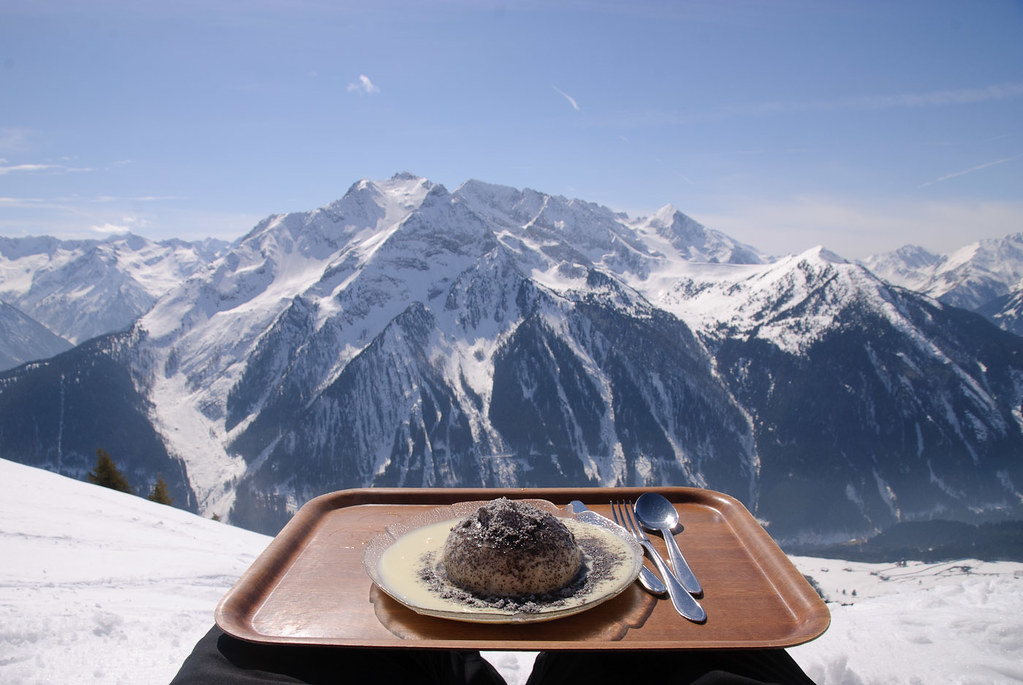 Culinary tradition in the Tirol region of Austria revolves heavily around the wild game and crops indigenous to the forests and mountains surrounding it. One of the most typical dishes here are dumplings made from flour, bread, or potatoes that they simply call knödel. There are various styles of Knödel. They can be made from white flour, or rye, and contain ham, spinach, or cheese. According to custom the first knödel was eaten with soup, and the second with the second course, which typically consisted of sauerkraut, red cabbage, or often, stew, which it also compliments with well. Sweet variations of knödel also exist, in which case they put potatoes or milk curds in the dough. Tyrolean cuisine is heavily influenced by Italian cuisine, and comparisons can be drawn between knödel italian potato pasta or dumplings in Hungary. 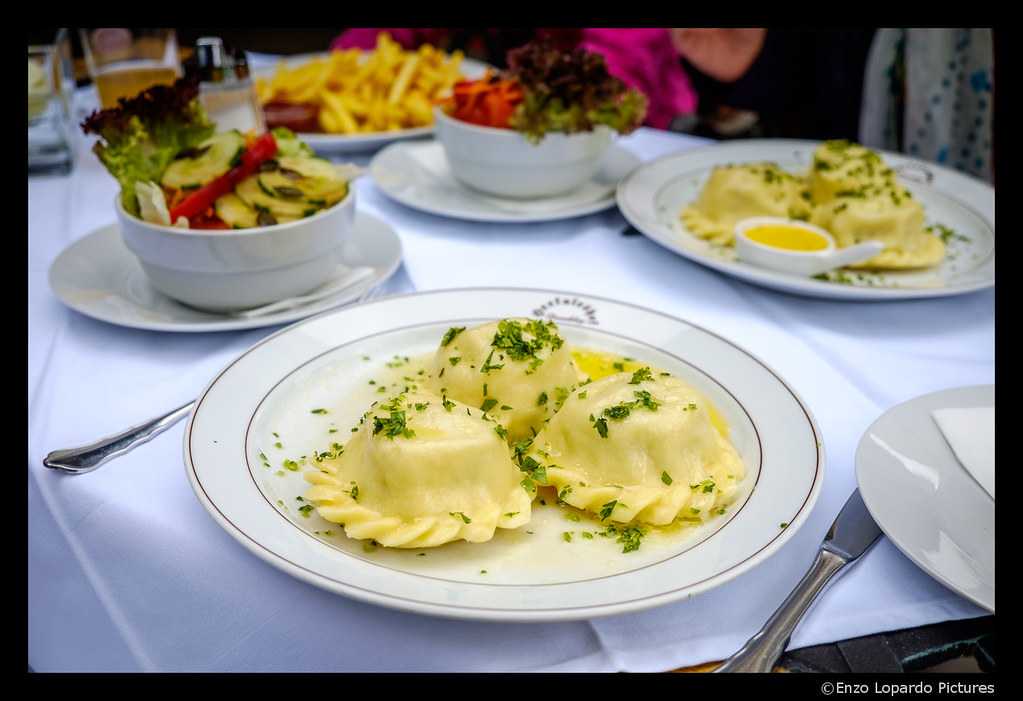 The Käntner Kasnudeln is a real traditional carinthian specialty, the creation of which is not exactly easy, but it is very tasty. The technique of making it has a history of its own, since in the past maidens would have to prove that they are ready to marry by ingeniously pinching the pastry in a special way. Most often they were made with potato or cheese stuffing, which is why it was a perfect meal for fasting. As time went on, more and more varieties were invented for the stuffing, for example ones with meat, spices or even dried pears in them. 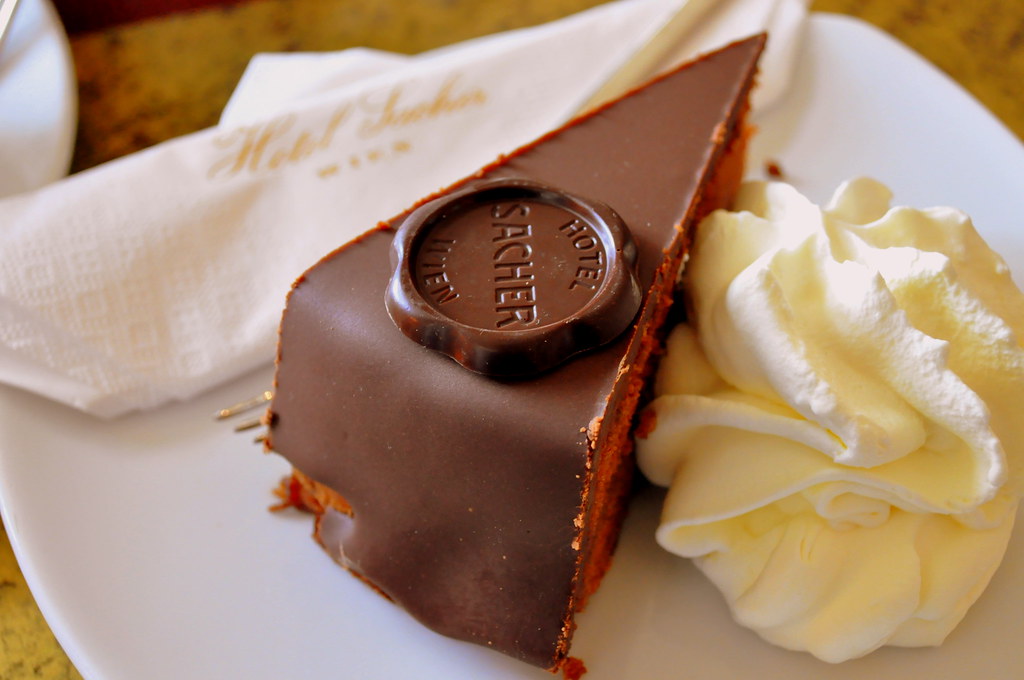 The story of the Sachertorte begins in 1832 at the palace of Prince Metternich Vienna when the prince commissioned a special dessert for himself and his high-ranking guests. “Do not shame me tonight!” he declared to the kitchen, where it just so happens the head chef was absent due to

illness. The challenge was up to 16-year-old apprentice Franz Sacher, who came through with the basic recipe of what we now call the Sachertorte. It took years for him to get the credit and recognition for the creation. In 1848 he opened a gourmet shop, and it was up to his son, Eduard, to continue his legacy. Eduard trained at the Demel Imperial Confectionary and created the Sachertorte we know today, which was first sold at the Demel, and was later made famous at Eduard’s own Hotel Sacher, where the recipe is still kept secret today. A 20 year quarrel began between the Demel and Hotel Sacher over who could use the “Original Sachertorte” brand. The compromise was that Hotel Sacher offers the “Original Sachertorte” which features two stripes of jelly, while the Demel remains home to the "Eduard Sachertorte" which has one stripe.

Dishes in Salzburg usually consist of a small number of simple ingredients that can be used many different ways. Salzburg style dumplings, called Nockerl, are almost as famous as the city itself, next to the Mozartkugel, which is the most famous local dessert. Nockerln are served in the shape of 3 mountain peaks, an homage to the mountains surrounding the city: Mönchsberg, Kapuzienerberg, and Gaisberg.

Youtube an insight into how salzburg nockerl is made

The true story of Nockerl is unclear, but some say that Napoleon Bonaparte introduced the dessert when he sacked Salzburg. Locals do not really like this version of the story, and many claim that Nockerl was invented in the 17th century by a woman named Salome Alt, who was for many years the mistress to Archbishop Wolf Dietrich von Raitenau. Salome received Mirabell castle as a gift, most likely in return for coming up with this delicious dessert. The only thing we know for sure is that by the 19th century this simple food was so popular amongst ordinary citizens that Archduke Johann von Österreich included it in a recipe book that he published.

Frittatensuppe is the traditional Austrian soup that you can get all over the country, but it seems to be the most popular in the snowiest regions of the Alps. It consists of a simple broth served with thick sliced noodles, which results in a rather hearty soup. This style is also very popular in Germany (Flädlesuppe), Italy (Brodo con tagliolini di crespelle), and Hungary (palacsintatésztaleves).

A typical winter drink is mulled wine, called “Glühwein” in German, which gets everyone into a real Christmas atmosphere. Mulled wine is essential for Christmas markets and Alpine hüttes, and is a combination of redwine, cinnamon, sugar, orange and cloves.

Countless types exist, like the so called “Jagertee-be”, which consists of rum and brandy, as well as redwine. Austrians are very innovative when it comes to creating “alcohol-free mulled wine”, for which they often use grape leaves, Almududler limonade or Red Bull instead of redwine.

The origins of strudel can be traced all the way back to the Arabian Peninsula from where it spread to Turkey through Egypt, Palestine, and Syria. The recipe for baklava arrived in Vienna in 1453 after the Turkish conquest of Byzantium. It was considered “marching food” in wartime because it was hearty and keeps well. Inspired by this Eastern food, the Strudel evolved and became trendy in higher circles during the reign of Maria Theresa. Due to the inventiveness of Austrian housewives, modernday strudels can be filled with pretty much anything, but apple remains the most famous filling. Strudel is best served warm with vanilla sauce or ice cream. 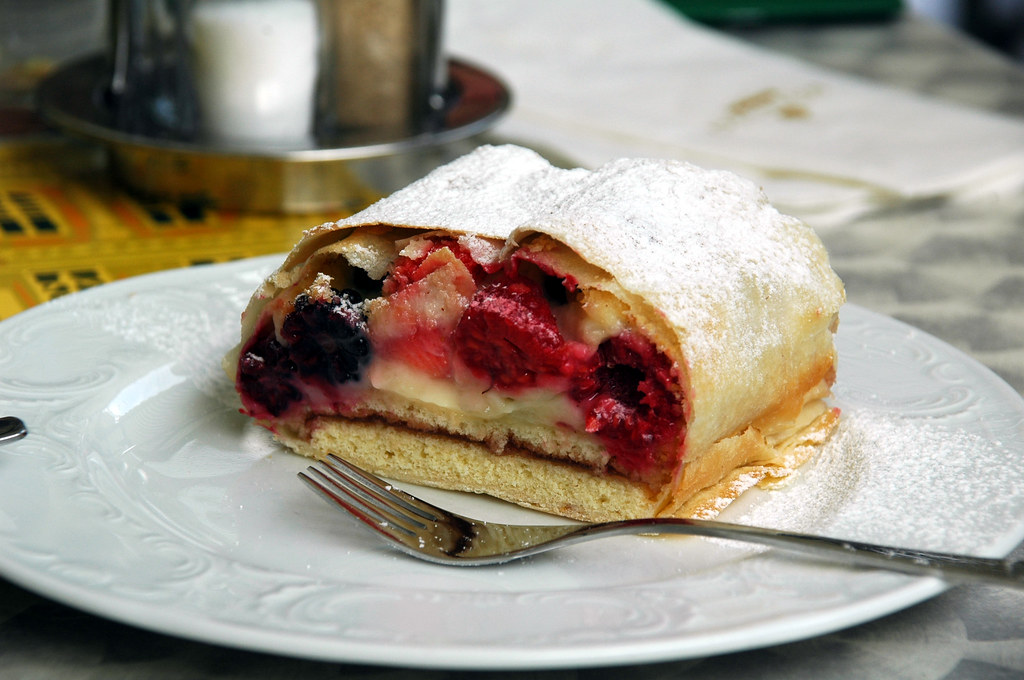 In 1884, confectioner Paul Fürst founded his eponymous confectionary in Salzburg after completing research in Nice, Budapest, and Vienna. He wanted his confectionary to offer the products that were better and different than everywhere else. He combined nougat, marzipan, and chocolate to create the Mozartkugel (Mozart Ball), for which he won a gold medal at a 1905 expo in Paris. Fürst did not secure rights for his invention, so of course everyone that could exploited his success. Today you can go into any supermarket and find Mozartkugel.

Youtube take a look into the kitchen of the original mozartkugel

Martin Fürst, Paul Fürst’s great grandson and current director of the business says that his family feels animosity against the imitators because they still create the highest quality Mozartkugel because of quality ingredients. Naming the balls after Mozart wasn’t even a marketing scheme because then Mozart wasn’t that popular yet, simply it was Paul who was a huge fan and enthusiast. Today, the Fürst's Mozart balls are some of the most popular, and definitely the sweetest souvenirs you can buy in Salzburg.

All in all, our recommendation of local dishes depends on which part of Austria the shooting will take place as the regional cuisines offer their various specialities. But if we would have to name one Austrian dish that you mustn’t miss out on while you are here, it would be the Wiener Schnitzel. Still, naturally we are best at recommending dishes in person. We hope to meet You soon in one of Austria’s regions!