Drinks You Must Try During Your Stay in Budapest

Hungary has a very diverse and rich drinking culture. Hungarians mainly drink 3 kinds of alcohol: wine, beer and pálinka. Progressive Productions put together a short introduction of these.

Hungary has a very diverse and rich drinking culture. Hungarians mainly drink 3 kinds of alcohol: wine, beer and pálinka. Progressive Productions put together a short introduction of these.

Hungary offers a lot of different kinds of wines, as this alcoholic beverage is a major feature of Hungarian culture, history and gastronomy. Hungarians are very proud of their wine so we think this is reason enough for you not to leave without trying at least some of them, for example Tokaji Aszú or Egri Bikavér.

Some of the best-known wines is the white dessert wine called Tokaji (named after the North-Eastern wine region of Hungary, Tokaj) and the red wines from Villány (from the southern part of Hungary). Furthermore, the wine region of Tokaj is a UNESCO World Heritage Site because of its cultural and traditional values. Even King Louis XIV of France got some Tokaji wine from Francis Rákóczi II, Prince of Transylvania!

The wine called Bull's Blood of Eger (Egri Bikavér), a dark, full-bodied red wine, is one of the most famous Hungarian wines. According to legend, the name Bull’s Blood comes from the time when Hungary was under Turkish occupation in the 16th century. The captain of the Castle of Eger gave the soldiers red wine to drink during a battle against the Turkish. When the Turkish soldiers saw that the Hungarian fighters seemed to be revived by a red liquid they thought that they were drinking the blood of bulls. They didn’t dare to fight anymore and they gave up the battle. Actually this legend is not true, because at this time in Hungary only white wine was known and made, but it is still a nice story.

Hungary’s best and most famous wines that you should absolutely try are the following:

You can try these wines at almost every restaurant in Budapest.

A popular saying in Hungary expresses our fondness of this alcoholic beverage perfectly: what can be used to prepare jam can also be used to produce pálinka. An omnipresent speciality throughout the whole country, pálinka (pronounced ˈpaːliŋkɒ) is the name for the fruit brandy often distilled from home-grown plums, apricots and pears.

The drink pálinka was first mentioned in writing in the 17th century. The 19th century records count 200.000 pálinka breweries, but afterwards their numbers lowered, due to the trade union’s centralising regulations in the time of the industrial revolution in order to raise the standards of the national and international pálinka market. In beginning of the 20th century the drink became internationally renowned. The socialist regime wanted to take all wealth, business and factories into the state’s hands “so that they could give it to the people”. Pálinka brewing was also nationalised. Since then, the weakest pálinka is 40% alcohol.

Pálinka was not always such a popular and fashionable drink as it is now. After the political change in 1989, the bad quality of the equipment and materials lead to hardly being able to find good quality pálinka in the country, since as everything that is nationalised, its quality fell rapidly over the decades. Back then people were used to this, which is why there wasn’t much desire for good quality drinks on the market. They were unaware of what high-quality pálinka could be like.

In 2002 a new law gave pálinka a precise definition and the government got the originality of the drink accepted by the European Union. This shows that the government intended to make pálinka a popular and quality drink again, in order to make Hungarian culture and economy to flourish. Taking advantage of supporting cultural marketing, around the millennium brewers started to invest in good quality machines and an infrastructure for acquiring quality fruit, hoping that their products will be valued by those with good taste and gain popularity once again.

In 2010 the Hungarian parliament made it legal to brew pálinka at home and if they only make under 50 liters, it is tax free. Previously, regardless of it being illegal people still make pálinka, so it was better to accept home brewing to a certain degree, then put a cap on the amount so that the state would gain some tax. Therefore, if someone has a good harvest of fruit, they often make pálinka out of the leftover fruits. But to keep the quality of pálinka high, what is made at home can only be called distillation. So lately more and more people are drinking quality pálinka, with countless brands appearing with a variety of marketing strategies.

The strongest Hungarian pálinkas are usually called "kerítésszaggató", which literally means "fence-ripper". As you might have figured it out, this word play refers to a drunk person’s loss of balance.

The best and most famous Pálinka brands are Rézangyal, Árpád, and Zsindelyes. You can usually try all of these bands in bigger pubs and restaurants.

Unicum is a unique liquere of Hungary, manufactured by the Zwack family’s company according to a secret recipe that contains more than forty types of herbs. Although many drink it as a party shot, it is also drunk as an aperitif, since its dry bitterness is perfect for gaining an appetite. This drink was originally invented in 1790 by the court doctor for healing the king Joseph II. The royalty loved it so much that they called it truly unique, which lead to its timeless name. The Zwack company was later founded and after making it a trademark in the 1880s, the production of Unicum started. That was when the iconic design of the Unicum bottle was made and was so successful that it has hardly changed since. Next to its benefits for digestion, it also has a 40% alcohol content, making it a perfect accessory for a night out on town.

Hungarians are very proud of this unique national drink, that amazingly survived the country’s extremely turbulent 20th century. Up to the end of the 1930s, the prosperous family lived an affluent lifestyle, which then declined due to the country’s anti-semitic government, leading to them being nearly murdered during the Second World War. Still, the end of war they did not bring them peace, because the new communist government socialized the Unicum factory, but cunningly before emigrating the Zwacks handed over a fake recipe for the spirit. Peter Zwack stayed true to his family tradition and successfully produced drinks under the iconic company name in the U.S. After the political change he decided to return to Hungary and to regain ownership of his family factory, but was not given any compensation from the state and had to buy it back for 20 million dollars. Ever since then the company is continuously flourishing in Hungary also with a developing international market.

Drunkenness and its Depiction in 90s Hungary

In Hungary in the 1970s, it was a significant problem that in the morning workers on their way to work would drink one or two shots of pálinka. They would often arrive to their job under its influence and some would even continue drinking during the day while working. This is why in 1978, the government enforced a new law, according to which shops could not sell alcohol before 9 am. This helped somewhat, but a new law was made in 1986, according to which it was forbidden to consume and sell alcohol in workplaces. Although work events meant an exception, spirits were banned even at these occasions.

It is from this period, that the Hungarian comedians’ peculiar depiction of drunks originates. Up until the middle of the 90s, drunkenness (on television as well) was characterized by workmen, who could hardly speak and were hardly consciously aware of themselves. A scene featuring a drunk workman was pretty much an indispensable element of any comedy show. Via these scenes they were able to say such truths, that they would not dare to state otherwise, for example comments on the problems and unlivable conditions of socialism.

Since then the laws banning selling alcohol in the morning have been repealed, because this social issue has ended. On the other hand, now in many districts of Budapest after 10 pm foodstores are prohibited to sell alcohol, in order to minimize the disturbing loud youths on the streets at night.

Despite the fact that Hungary isn't particularly well known for its beer, 'sör' (which is beer in Hungarian and is pronounced shør) has been brewed here for over a thousand years.

Nowadays more and more local breweries are opening up and offering great craft beers so even the craft beer market of Hungary is getting better day by day. So for your sake we suggest that you don’t miss the opportunity to visit some of these places during your stay here. 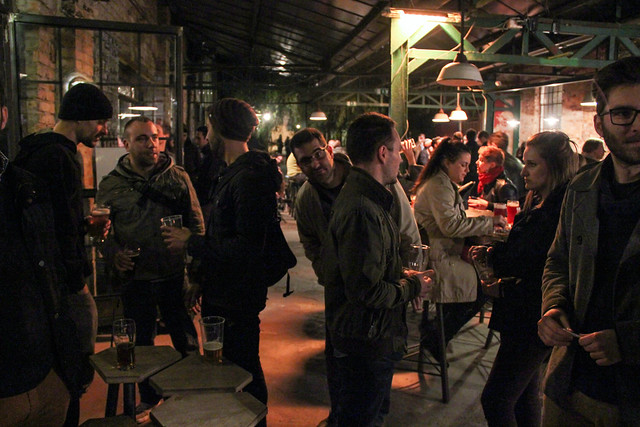 Fun fact: Hungarians traditionally do not clink their glasses or mugs when drinking beer. In 1848 there was a revolution against the Austrian Empire of which Hungary was a part of. After the failure of the revolution the Austrian general Julius Jacob von Haynau ordered the execution of thirteen Hungarian rebel generals, who are now called the Thirteen Martyrs of Arad. There is an urban legend in Hungarian culture that Austrian generals clinked their beer glasses to celebrate the execution of the generals, and since then Hungarians don’t clink their mugs when drinking beer. Many people still follow the tradition, although younger people usually don’t, saying that the vow was only meant to last 150 years. So it is theoretically discontinued but in practice, this tradition is still ongoing today. Even today throughout the country it is still considered to be in bad taste to clink beer mugs.

The most popular Hungarian beers are Dreher, Borsodi, Soproni and Arany Ászok.

If you are a beer lover visiting Budapest, you should try the beer pubs that offer craft beers brewed by local breweries like Élesztő and Léhűtő.

You can try all of the aforementioned beers in every restaurant and pub.