In the last few years, drones have become an integral part of filmmaking all around the world. In Hungary, as was the case in many parts of Europe, the rules and regulations before 2021 were quite disorganised and in most cases, raised more questions than the ones they answered. Among other things, this was why it became indispensable to create a unified and controlled system that can equally guarantee the convenience, safety and straightforwardness of the use of drones. The fundamentals of the new system were finally set by the European Union, but the member states were given freedom in setting their rules, provided that the EU’s principles are not violated. As a result of this, we can now say that all necessary permits to fly a drone in Hungary can be obtained in 5 days for flying over a populated area, and no administration is required to start shooting outside a populated area if the drone is under 25 kg and does not fly higher than 120 meters.

In the last few years, drones have become an integral part of filmmaking all around the world. In Hungary, as was the case in many parts of Europe, the rules and regulations before 2021 were quite disorganised and in most cases, raised more questions than the ones they answered. Among other things, this was why it became indispensable to create a unified and controlled system that can equally guarantee the convenience, safety and straightforwardness of the use of drones. The fundamentals of the new system were finally set by the European Union, but the member states were given freedom in setting their rules, provided that the EU’s principles are not violated. As a result of this, we can now say that all necessary permits to fly a drone in Hungary can be obtained in 5 days for flying over a populated area, and no administration is required to start shooting outside a populated area if the drone is under 25 kg and does not fly higher than 120 meters.

In this Insights article, we have gathered the most important general and Hungary-specific drone regulations and possibilities to help our clients' decision making if they are planning a film shoot in Hungary that also requires aerial photography.

There is a significant difference in the Hungarian regulation regarding the use of drones for filming purposes, compared to the EASA’s (European Union Aviation Safety Agency) principals. According to the EU’s guidelines, those drones that have a device mounted capable of image capture, but do not exceed 4 kg, can fly over a populated area without a special permit. However in contrast, to fly in Hungary over any populated area, a so-called occasional airspace must be requested on a case-by-case basis from the Ministry of Defense’s Aviation Department. It can normally take up to 30 days to process this application, but if the application meets two restrictions, the procedure will be shortened to 5 days. The first restriction is simply that the drone cannot fly higher than 120 meters, but the second restriction is a little more complicated and requires more attention when designating the flight area. Namely, the 5-day administration period is applicable only if there is no overlap between the airspace applied for and the so-called “No Drone” zones. This means that the requested airspace cannot overlap in any way with an airspace where the flying of drones is fundamentally prohibited. Examples of such zones are the airspaces used by airports, military establishments or civil aircraft, but also the airspace of certain nature reserves. This does not mean that flying in these areas is completely prohibited, rather that a longer assessment period may be necessary, but there are certain areas for which permits will presumably not be granted  (for example regarding active military airspace).

Can a foreign drone pilot fly a drone in Hungary?
Yes, as long as they have a license issued in one of the Member States of the European Union.

Which drones are allowed to fly in Hungary?
Only drones that have been registered with the Hungarian authorities and that are insured. Therefore, it is important to highlight that a drone imported by a foreign crew can only be used after being registered locally.

Where are drones allowed to fly?
Anywhere, apart from the specific “No Drone” zones (eg. active military airspace) and areas where the personal rights of uninvolved people may get violated (eg. the gardens of apartment houses, private territories, etc.).

What kind of drones can fly over a populated area?
Any type of drone can fly above a populated area, provided that it has been previously granted a permit to use the airspace as occasional airspace.

How long does it take to be granted an occasional airspace use permit?
Maximum 5 days, in the case that the drone is not to fly higher than 120 meters and does not fly into a “No Drone” zone. In every other case, 30 days.

Is a permit necessary to fly above an unpopulated area?
A permit is not necessary for a drone no heavier than 25 kg.

How high can a drone fly?
Up to 120 meters without a permit (from the ground’s closest point), and any higher than that only with a specific permit.

However, there is also a favourable alteration in comparison to the EU guidelines. While the EU regulations do not authorize drones between 4 and 25 kg to be flown in populated areas in the open category (which will be explained later in detail), in Hungary applying for occasional airspace redeems this restriction and enables all drones up to 25 kg to be flown over populated areas, without requiring additional permits.

EU-level standardization has also paved the way for drone pilots to work in any other member country. According to the 2021 Regulation, pilots are to have a licence, to prove they have registered and passed an exam, which has to have been obtained in one of the Member States and thereby is valid throughout the Union. 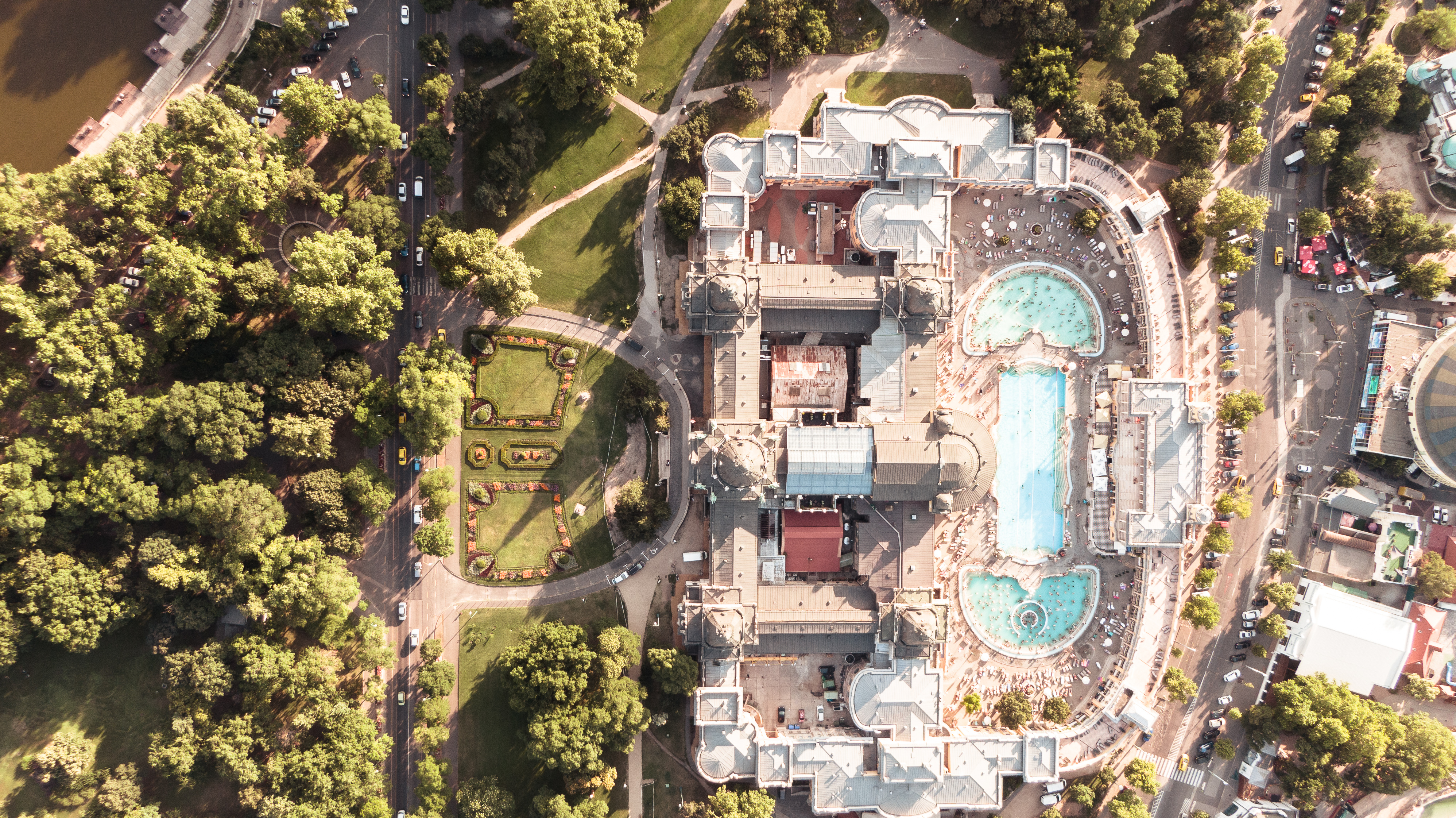 However, it is important to mention that even though the personal ID licence is valid throughout the area of the Union, if someone would like to fly a drone imported to Hungary from a foreign country, then this has to get registered at the local aviation authority. Furthermore, they either need to get liability insurance locally or have to prove the existence of an internationally recognized insurance. The obligation to register also differs from EU directives, but registration itself is a quick process, as manufacturers have to indicate the legal classification of the drone on the device, depending on the physical parameters of the drone, which makes the registration process standardizable. For drones manufactured before the change in legislation and which do not yet have a factory classification, the registration process may take longer, but if they also have a full physical specification and are insured, registration can still be done quickly.

Furthermore, in every state member of the EU and therefore in Hungary as well, the state had a mobile phone application developed which tracks the requested and declared airspaces, thereby providing assistance for all pilots in the area. The use of this application has been made compulsory by law. The operator has to use it before takeoff and while flying the drone, and is to pay extra attention in areas that do not require permits, where multiple devices are enabled to be in the same airspace at the same time.

As mentioned earlier, 3 categories are classified under the current drones law. The categories were formed according to weight and the types of operations that can be performed with the drones. Of these three, only two affect those working in the film industry, which are the open and specific categories.

The open category was fundamentally created for hobby drone users, which is why this category has relatively a lot of restrictions, however, it is still recommended for productions to operate within this category in certain cases. In general, such operations are included in this category that are performed by drones under 25 kg, which pose minimal risk and that do not fly higher than 120 meters, while constantly staying within the pilot’s visual line of sight. Furthermore, drones in this category can not fly near uninvolved individuals, nor above crowds. Therefore these restrictions can exclude certain productions from this category. However, in cases where only a smaller drone (for example DJI’s Inspire series) would be used for shooting without flying over crowds, it perfectly fits this category and it only takes the smallest amount of time to gain a permit.

In the case that a drone is heavier than 25 kg or if we are talking about an operation that poses more risk, then it is considered a specific category operation. This category can provide much more freedom for the operation, but which consequently involves more administration as well. Here, a separate permit must be requested from the responsible ministry in order to carry out the operation, which is conditional on a declaration and issuance of a risk analysis of the operation before the application is submitted. But let’s see what further kinds of possibilities can this category provide for shooting with a drone. Drones in the specific category are not restricted to a maximum flight altitude of 120 meters, nor by a ban on flying over a crowd, nor does the pilot even have to keep the drone permanently in their visual line of sight. In addition, it allows various objects and devices to be flown or even dropped by a drone, not to mention that it enables the use of drones weighing hundreds of kilos which are suitable for flying even the heaviest ARRI or RED cameras.

It is also important to mention regarding the specific category that the EASA also provides an opportunity in its guidance to develop a faster authorization process in the future. At the time of writing, the so-called Standard Scenarios only existed as a plan but it will consist of operations within a predefined framework, which after being put in operation, will significantly speed up the entire administrative process. If an operation falls within the definition of a Standard Scenario (STS), both the process of risk analysis and authorization can be omitted, making only the confirmation of completeness necessary by authorities.

Currently, only two such STSs exist, none of which cover filming activities, but it is planned that this system will significantly expand in the future, hopefully also becoming more useful for film productions as well. But until these become available, each operation in a specific category must be authorized separately. This means that the duration of administration depends largely on the complexity of the operation. In the case of a more simple shoot, where operations with drones involve minimal risk, authorization is a faster procedure, but as more complex situations arise, the time required to obtain an authorization may increase significantly. Therefore, for productions where more complicated drone use is required, Progressive Productions’ team should get involved in the preparations as soon as possible so that a prolonged authorization time will not disrupt the production schedule.