Where to Go Out for a Drink? Progressive’s Recommendations

We know that the main reason of your stay would be to get work done, but we also know that having fun and relaxing a little bit is also an important part of your journey. To make the best of your trip, the team of Progressive Productions would like to suggest a few ideas about how to spend your free time in Hungary.

We know that the main reason of your stay would be to get work done, but we also know that having fun and relaxing a little bit is also an important part of your journey. To make the best of your trip, the team of Progressive Productions would like to suggest a few ideas about how to spend your free time in Hungary.

When nighttime comes around, the streets of Budapest are transformed into the center of social life, becoming crowded with both Hungarians and foreigners.

These days, the streets surrounding Király street are considered as the main entertainment district in the city centre, but the diverse nightlife is spread all throughout the capital. The choices are endless, you can try pubs, dance clubs, jazz bars, cocktail bars or casinos. Also there is a new wave of evening entertainment is represented by the ‘Ruin Pubs’. 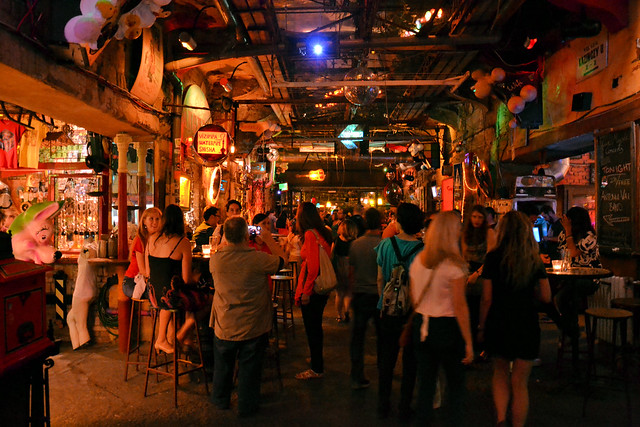 Ruin pubs are a special, Hungarian type of bars that are situated in previously abandoned buildings and homes. They started to gain attention more than a decade ago and they quickly became the favourite gathering place of Hungarian youths. The ruin pubs brought new life into Budapest’s nightlife, as they have a very fresh and unique atmosphere. These pubs are now highly favoured by both residents and tourists.

A quick answer to those looking for a bustling hub of bars and discos, Progressive Productions would suggest going to Gozsdu udvar which is kind of the party centre of Budapest and is full of bars and people. Continue reading to get to know more about the pubs and concert halls that Progressive recommends. 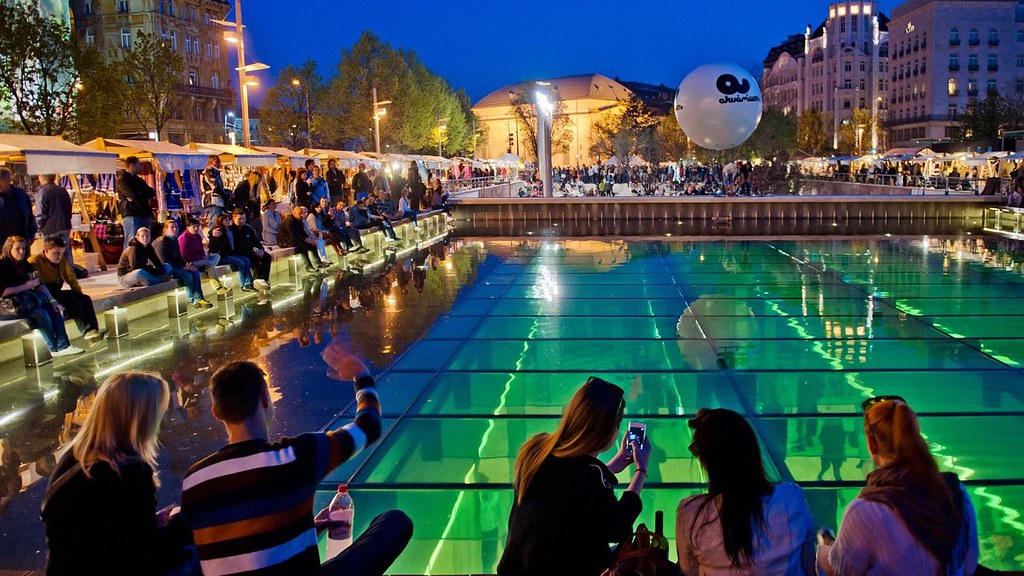 The very first of the iconic new wave of ruin pubs in town is the Szimpla. Founded in 2004, it has to offer authentic, truly magical atmospheres. It houses unique rooms each with their own special designs, some full of vintage computer screens broadcasting cool VJ sets, a courtyard with a vintage Soviet Era Hungarian car converted into sofas, a shisha bar, cool live concerts and sometimes even film screenings.

The Csendes is a unique and much loved café and bar with the huge amount of quirky doodling on the walls and with surreal artistic decor. On its spot a century ago a huge café used to function, that was one of the cultural hubs of the city, inhabited by writers, actors, politicians and the likes. It is of historical significant because this is where Hungarians first got the news of the outbreak of the First World War.

But the most eccentric story to tell is unquestionably about the concert venue the Dürer Kert’s. The building was originally constructed in the 19th century to function as a nunnery, then the Second World War lead to it becoming the Communist Party’s College, but after the political change it merged into a large university called the ELTE for more than a decade. Yet, currently under the name Dürer Kert, the gym, chapel and presentation hall are all used to give home to some of Budapest’s most important concerts, ranging from underground to electronic, from emerging locals to international stars.

Another key location is the Budapest Jazz Club, which is a world class jazz venue for international and local jazz musicians, acclaimed and rising stars, with about 500 concerts a year. The building was originally built as a cinema, until it was repurposed 15 years ago. This venue ensures great acoustics and unique spaces, creating an atmosphere that is sophisticated and friendly at the same time. Also next to great music and beveridges, the club has sophisticated bistro meals to offer. 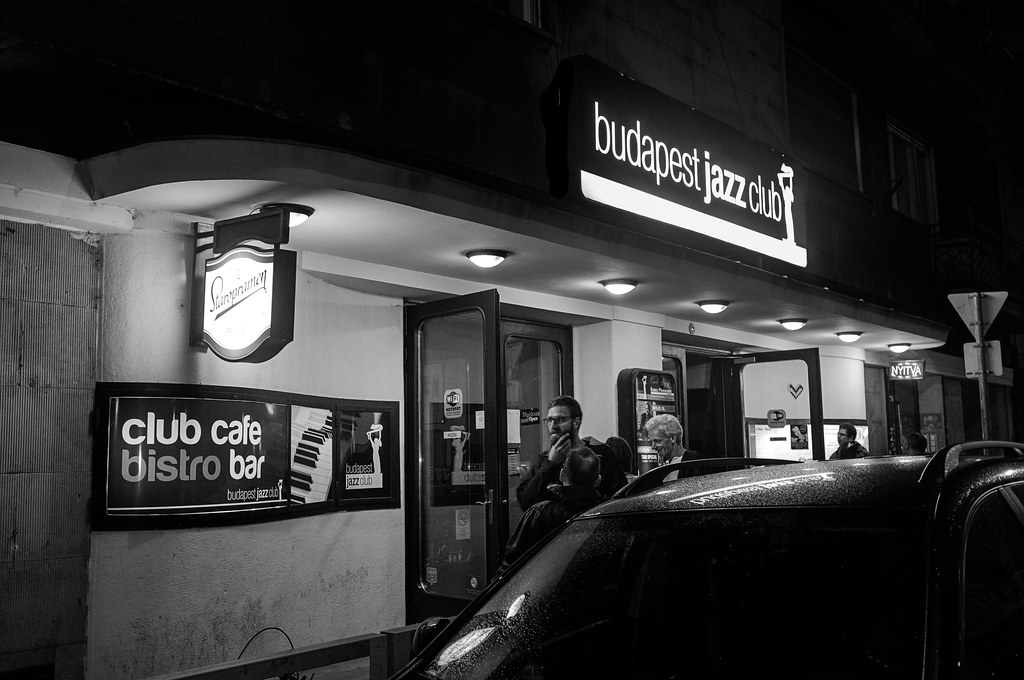 During the last few years, Budapest has been home to many Hollywood super-productions. During the shoots large numbers of worldstars have arrived to the Hungarian capital city, who after a long and tiring day of shooting, happily let their hair down in

The Instant is unquestionably the party center of Budapest’s ruin pub scene where Anthony Hopkins and John Cusack partied during the shooting of The Rite in 2011. It has lately merged with Fogas, bringing you the best DJs in town that you can dance to in slick halls, with multiple dancefloors and the trippiest interior design you could wish for.

Keanu Reeves and Jeremy Irons enjoyed the great vibes of the Ötkert in 2013, which is another typically cool venue in the heart of Budapest, developed from an old tenement house. It caters for the enthusiasts of all sorts of events, like exhibitions, DJ sets, koncerts, acoustic nights and cool dance events.

In 2014 Melissa McCarthy, Jason Statham and Jude Law came to Hungary to film the successful comedy Spy. Among them it was mainly Jude Law who ventured into Budapest’s nightlife. He did a pub crawl in the city center, his favourite was the previously mentioned Gozsdu udvar, where everyone was friendly and he could start a conversation with anybody. He even sang an Irish folksong to an Irish student one night.

Similarly to Jude Law, Jennifer Lawrence also partied enthusiastically in Budapest. The Oscar-winning actress came to Budapest to shoot Red Sparrow, and in her free time enjoyed wandering in the city, as well as appearing in Budapest’s nightlife several times. One evening she partied in a ruin pub called Klub Vittula, which is surprising because the club is rather like a jampacked, rundown cellar, where even 30 people count as a crowd. Regardless, it is known that there are often crazy parties here, and Jennifer probably got bored of all the fancy and elegant parties, becoming interested in what an authentic alternative place is like in Pest. According to witnesses she behaved naturally and really enjoyed herself.

“
The mountains on the Buda side, the plain on the Pest side, and the River Danube between the two part are amazing, especially by night when the whole city is in floodlight.”Tom Hanks

In 2015 Tom Hanks and Ron Howard shot Inferno partially in Budapest, but few months later the director made everyone, including Tom Hanks go back to Budapest to improve on a few scenes. During their second “outing” in the Hungarian capital, they visited a Michelin-star restaurant; the Borkonyha, where they happily posed for a photo with the restaurant’s workers.

Ryan Gosling and Harrison Ford spent a few months of 2016 in Budapest to shoot Blade Runner 2049. While Ryan Gosling prefered to withdraw from the crowd (he only left his family for a photoshoot with GQ magazine), Harrison Ford made the most of his free time and travelled around the country. He visited a Budapest bicycle shop to get his bicycle fixed, then tasted fine wines in the central Pomo D’oro Italian restaurant and dined in the Greek Taverna Dionysos Budapest restaurant. Harrison Ford made not only his urban, but also his countryside fans happy, when in Kisoroszi he took a break from his bike tour to have a filling breakfast in a diner.

The American rock band Red Hot Chili Peppers did not only come to Budapest to shoot, they also went to a concert, and even next to that they weren’t hiding in their hotel rooms; they rather popped down to the bar Pontoon, on the Pest side next to the Chain Bridge. They checked out the band called The Qualitons’ concert, with whom they did not only have a friendly chat, the members of the RHCP even asked for one of their CDs.